Canada is known as a peaceful nation. We have welcomed the world to our shores. 22% of our population was born outside Canada. Wherever I go, people speak highly of our nation. But Friends, right now Canada needs help.

Have you ever been tempted to give up, to stop believing for your family, your town, your province and your country? This letter is an urgent call to every believer from Newfoundland to Vancouver Island.

One of my Canadian heroes is the late Dr. Oswald J Smith, founder of People’s Church in Toronto. As a 14-year-old I read his life story. I was stirred by his statement that Canada has never experienced a nationwide spiritual awakening.

The United States and many nations have experienced national awakenings. But not Canada! Our nation is multicultural. Is a spiritual awakening possible in Canada? Is it possible in your city?

1. When the devil tempted Jesus, he showed him all nations (that includes Canada), and claimed that the nations belong to him, (Matthew 4:8-9). There you have it; the devil lays claim to Canada. But remember that he’s a liar.

Whose report will you believe?

I believe God! A national spiritual awakening is possible in Canada!

God has a purpose for Canada and Canadians. Yes, there are huge problems and challenges. Churches are in decline. God is mocked in the media. There is a cancel culture that wants to silence those who hold up the name of Christ.

Remember that God specializes in the things that we think are impossible. Then when good things happen, God receives all the glory.

Friends, “revival” is a popular word, but I purposely speak of an awakening. It represents something bigger, something grander; God wants to awaken Canada.

The flag of Canada was approved after much debate in Parliament. Many national flags show stars, planets and crosses. Ours is unique; red, white and a Maple leaf. Here is how the Canadian flag speaks to me:

Prayer and action go together. Action without prayer is powerless. Prayer without action easily becomes selfish. Join me as we take unprecedented action, motivated by prayer.

These outreaches require a large amount of finances. We are not waiting for the time when the lock-down and pandemic are over – we are taking steps of faith now.

I prayerfully ask you to stand with me:

1. When you respond, I will send you three items: the DVD, When God Shakes a Nation, the Prayer for Canada bookmark and the He Shall Have Dominion magnet.

2. Give your very best gift! The Facebook and YouTube Gospel Campaigns in Hindi and other large languages involve a large amount of finances. Your help is needed! Remember, every $1 reaches at least 10 people.

3. The VIP family of monthly partners is the backbone of World Impact Ministries. If you are not committed every month, please make your monthly commitment. If you are a member of the VIP family, please add something extra every month to help us reach Canada.

Thank you for your love for the gospel around the world, and also for Christ gospel to touch our beloved Canada!

Your co-worker in the gospel,

When God Shakes a Nation (1Hr DVD) is a powerful prophetic message, available with your gift of $30 or more. Ask for it in DVD or CD. Plus receive the Prayer for Canada bookmark, and the He Shall Have Dominion magnet. 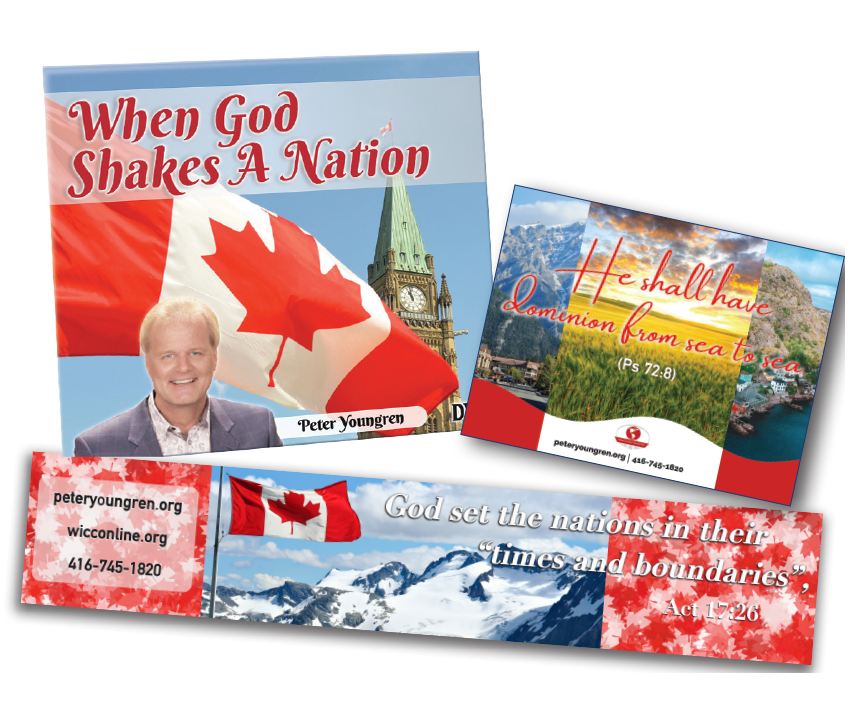 Order the product
Give Now